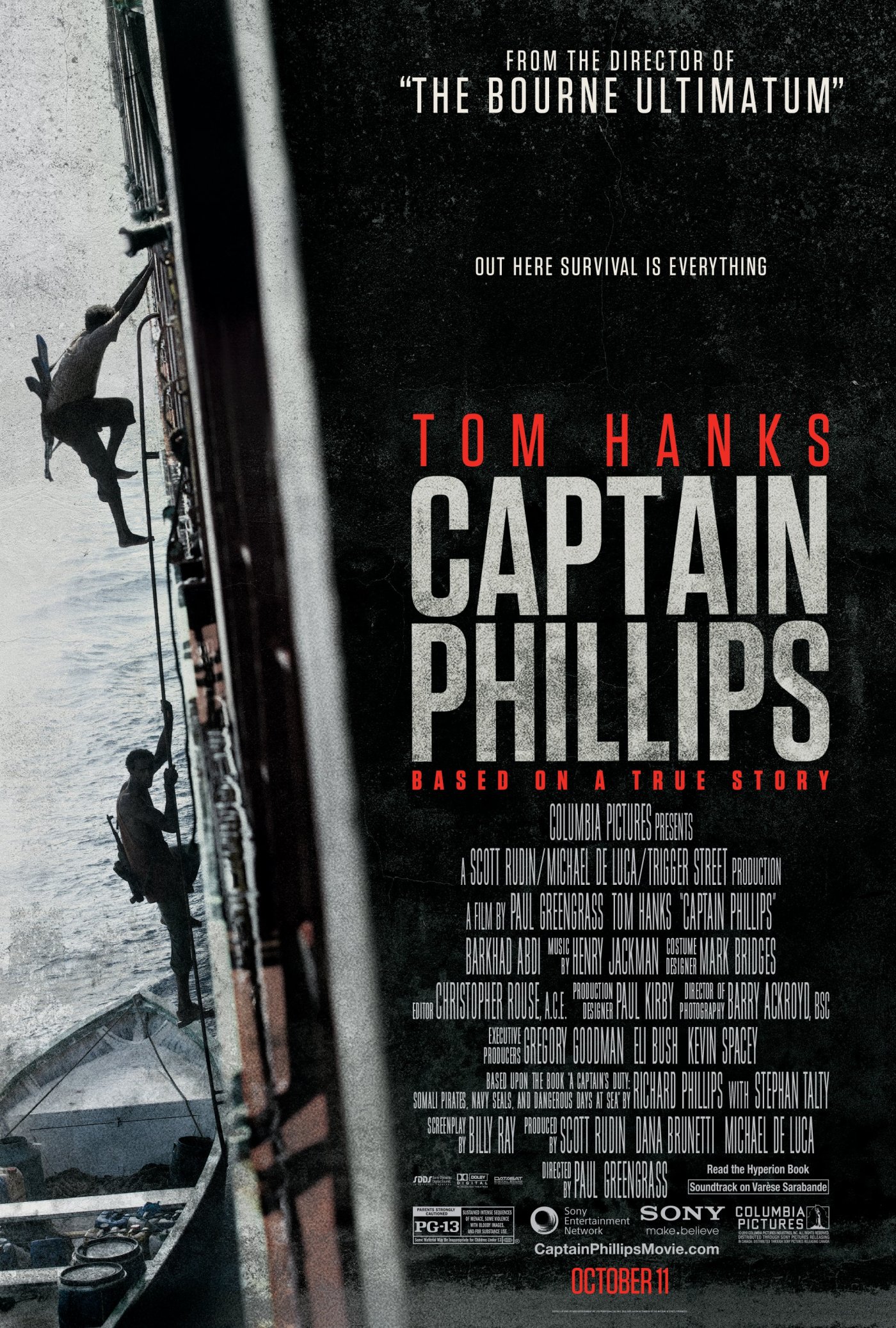 Captain Phillips’ (2013) formula is a tired one – we have a seemingly ordinary bloke up against odds that seem impossible to beat. We’re supposed to kid ourselves into wondering who’s going to emerge victorious when we know the answer to that all along.

The film was partly shot in Malta and stars Tom Hanks. This was enough reason for me to buy that middle-of-the-theatre ticket. Captain Phillips is one of those films which have you wilfully suspending disbelief for the most part and simply enjoying the ride, taking solace in the knowledge that a happy ending is imminent and the bad guys will be getting their comeuppance in the end. This is no spoiler as to some extent, Captain Phillips is real and alive today, silver goatee and all.

As much as I may have wanted to experience the antagonists’ humanistic side and be sympathetic to them, it was next to impossible to do so. The story was presented in a blatantly biased dish of white against black, night against day, and heroes with clean-cut, conventional appearances up against scrawny villains who could have been the faces for a Save Africa campaign.

The film plays like a show of strength between the all-mighty God-fearing USA and any barbarian who dares stand in her way. From the moment they first appear, villains are clearly destined to lose.  The audience in the theatre (which numbered forty-something), played along and reacted as was expected of it.

On the whole, the film worked with this audience. During particularly quiet sequences of the film, I could hear the sound of my own breathing. On film review websites, Captain Phillips’ audiences are quite divided, the main reason being that rather than based on the actual events themselves, the film is based on the interpretation of these events as documented in Richard Phillips’ book A Captain’s Duty: Somali Pirates, Navy SEALs, and Dangerous Days at Sea (2010), published less than a year after these events took place.

In his description of the events, Phillips drew a more than flattering self portrait. Interestingly, his take on what happened (which were what this film is based on) contrasted heavily with what his real-life crew had to say about him and his attitude regarding their personal safety. Without a doubt, Tom Hanks portrayed the Phillips from the book, aptly hollering “Don’t shoot him, shoot me!” in the face of the dangerous though bedraggled Somali pirates. This is something the actual crew adamantly denies happened in real life.

Thankfully, I got to know this information after watching the film, so I was unburdened by the thought that I may be watching the cinematic version of the pompous ramblings of a narcissist. No doubt, that would have surely affected my overall experience. Instead, through most of the film I was able to forget Tom Hanks and remain awe-struck by Richard Phillips’ apparent extraordinary feats of bravery, constant clarity of mind and all in all, good luck.

On the other hand, I now feel somewhat sorry for those who dismissed the idea of enjoying the film solely on the possibility that it might be based on a lie. At the end of the day, is the fidelity to what really happened so important? A well-made film simply works on its own merits. I perceive the notion that regular movie-going audiences, who constantly gorge on fantasies conjured up and moulded by screenwriters find it easy to hate a film only because ‘that wasn’t what really happened,’ quite amusing. I find it’s the reality presented to us that ultimately matters.

This debate on how ‘truthful’ is Paul Greengrass’s telling of Captain Phillips’ ordeal reminded me of similar discussions that came about in 2011. Just after The Devil’s Double came out, the story’s authenticity began being doubted. Like Captain Phillips, the film is based on the written memoirs by the heroic survivor of tragedies of epic proportions. And also like Captain Phillips, what really happened did not ultimately matter much; it does not change the fact that The Devil’s Double is an explosive roller-coaster ride which does not cease to entertain.

Captain Phillips can be segmented in three acts, the unfortunate who happen to watch the film in Malta, the first two happening in the first half of the film and the final act taking place after the intermission. Act 1 shows the Captain as a (as Jon LaJoie would put it) regular-everyday-normal-guy.

Phillips is a family man who is looking forward to his retirement, growing disenchanted with the tiresome routine his job imposes on him. The second act brings the film to life, focusing on the pirates’ initial and second attempt at taking over the ship. This was effectively executed in a much subtler manner than expected. The film doesn’t resort to incorporating any special effects or placing its characters in unbelievable scenarios.

The script flowed freely, the pirate’s reactions to the crew’s actions were believable, and the audience knew it was in for a great time. The film’s second act is reminiscent of Die Hard (1988), broken glass and all.

The film slowed down considerably in its third act. This might have alienated those who were hooked on the second act’s promise of adrenaline fuelled, machine-gun toting interactions between crew and pirates.

This final segment (which actually takes up about half of the film’s running time) is mostly about what happened between the pirates and the captain in a very confined space. These moments feel much more intimate than the interactions that take place earlier on the ship. Suddenly, physical scale of the set shrinks considerably while emotions sky-rocket. Tensions are high. In addition, everything and everyone is largely shrouded in darkness – effectively going for realism and succeeding. Here I was left somewhat confused by the cinematography. The television film look (slightly whitewashed, I might add) was there throughout. Compared to the usual color grading we gave grown used to seeing in most cinematic productions, (including the aforementioned Devil’s Double, which coincidentally was also partly filmed in Malta), saturation was lacking.

While this may have heightened realism, I felt the film suffered because of inadequate lighting during the night-time (and engine room) scenes. Another technique that helped distinguish the third act from the first two was the way the camera was used. All means of image stabilizing equipment (dollies, tripods and what have you) seem to have been discarded. I generally enjoy watching films which are competently filmed using handheld, as when a film’s going for realism, (especially when capturing tense situations), a handheld camera can be effectively used to highlight emotion and mood. This technique can be effectively used to change the tone of narration in a film (eg. Dancer in the Dark, 2000) or simply to heighten realism (Open Water, 2003). In Captain Phillips, though, some jerks and shakes should have been substantially toned down. In some instances, they seemed a tad forced and almost patronised the audience; it almost had the same effect as if a crew-member was holding up a placard saying – THIS IS A TENSE MOMENT IN THE FILM. FEEL THE NAUSEA.

The acting was authentic throughout, definitely one of the film’s strong points. I don’t think Tom Hanks needs any praise from my end, but the performances from the men playing the pirates, especially Barkhad Abdi as their ever-confounded leader Muse, were top-notch. Abdi knew the character inside out. It was clear in the constant pain communicated through his eyes, while his projected frailty was carefully counteracted with rare cold bursts of violence. His unpredictability made him terrifying.

Abdi’s performance stole the whole show; he is clearly a sincere actor who knows his art, even though juxtaposed with Hanks (and most of the supporting cast), he is definitely a newcomer. I felt the irony throughout. As overblown as Captain Phillips’ heroic deeds may have been written, he was undoubtedly unanimously rooted for. He was the innocent white guy played by a fat Forrest Gump, who everybody loves more than they ever loved Raymond.

Muse is skeletal, unattractive by the standards the likes of Spielberg and Zemeckis have helped enforce, who although makes for the audience’s sympathy a number of times, he is restricted by a script which is clearly tailor-made to please paying audiences. A hint of immediate back story is given to his character, his situation and what drives him to do what he does, but not enough is given to fully explain him or to really give him a chance at redemption. Muse is destined to lose from the beginning.

Muse is portrayed as a savage, dim-witted weakling turned pirate, who simply deserves to die or rot in jail, with perhaps a million of his brethren thrown in with him. The film portrays Somalis as having no alternative but to pursue the criminal life. This is clearly spelled out when Captain Phillips, being a kind-hearted soul, tries to play (in an ever belittling fashion) the guidance teacher with Muse. Philips says, “There’s got to be something other than being a fisherman or kidnapping people”, to what Muse sadly replies, “Maybe in America, Irish. Maybe in America.”

This may just be the impression I got, but the film clearly does not even try to give the Somalis a fair shot. What may be even more ironic/sad is that Tom Hanks’ name will live on for hundreds of years, while I’m constantly having to alt-tab imdb.com to re-check Barkhad’s name. Something I feel will be an unnecessary action after finishing today’s review, as talented as Mr.Bakhard may be, his schedule doesn’t seem to be too full with imminent projects. I wonder why.

Each worthy Tom Hanks performance has its memorable Oscar moment. For me, in Saving Private Ryan(1998) it was the ‘Earn it’ line. In Cast Away (2000) it was the ‘Wilson!’ scene. Captain Philips also has Hanks’ big oscar moment (which happens quite late in the film). It will certainly become the moment most of us will remember Captain Phillips by, and which will no doubt be immortalised in a Best Tom Hanks Performances Compilation Youtube video.

Have you watched Captain Phillips? What did you think of it? Has this review affected your opinion of it in any way? Let me know in the comments below!

to buy Captain Phillips and add it to your personal collection. You will also be helping this website in the process, so thank you!